Driving while distracted is a big topic these days, as well it should be.  Anyone who’s been driving down the highway at sixty-plus miles per hour and glanced over  to see the driver of the car in the next lane texting with one hand and sipping a coffee with the other one knows the sheer terror that distracted driving can invoke.  It is a huge problem that has caused far too many accidents, and I believe it continues because so many people pride themselves on their ability to multi-task safely and efficiently no matter what they happen to be doing.  And they don’t find out until it’s too late that they are wrong.

I’m happy to say that I never text while driving, but please know that by saying that I’m not trying to claim a high moral ground.  It’s easy for me to resist the temptation to “just glance at” my phone when I hear the familiar ding of a text because I know for a fact that I can’t multi-task.  And I’m not just talking about while I’m driving, either.  I can’t multi-task at anything, ever.

Sadly, these days the inability to multi-task is fast becoming, if not something to be ashamed of, at least something that makes it hard to cope with the normal fast pace of life.  My computer is equipped with the ability to send and receive text messages, which means that when I’m trying to write a blog post I am often interrupted with a text notification, usually from someone who wants an answer to his or her question this very second.  Since I tend to require complete concentration when I’m writing (I turn off the TV, put my cell phone in another room, and wake the dog if she’s snoring), the interruptions are a problem for me.  I lose my train of thought, and what could have been a stunningly brilliant blog post is lost forever.  Which explains why my blog has yet to win the Nobel Prize for literature, I’m sure.

If I’m trying to cook a meal and someone insists on talking to me, I often forget an ingredient or burn one of the courses.  (Why all those people on HGTV want an open floor plan so they can “be a part of the conversation” while they are cooking is beyond me.)  When I worked in an office, I had notes for everything I did, because the constant interruptions meant I was also constantly forgetting where I had stored my information for a donor report or what the latest procedures for a job applicant happened to be.  I even had a note on how to properly transfer a phone call, and consulted it often.

I sometimes think I might have been a happier person if I had been born before the advent of all this technology, when people had the time to focus on the project at hand without being besieged by constant and conflicting demands on our attention.  I would certainly be more self-confident if I didn’t find myself constantly apologizing for not being able to pay attention to several, or even two, things at once.  But life is what it is, so I just muddle along and trust those who know me best to understand my limitations.

At least I know that I can’t text and drive at the same time.  That should count for something, I think.

I just got back from my annual doctor’s appointment, where I got some good news and some bad news.  The good news is that they found no health issues, so if all goes well, I don’t have to darken their door for another year.  The bad news is they want me to sign up for their “online patient portal,” which they promise will allow me to access my medical records, ask questions, and make appointments quickly and easily.  Previously, doing any of that meant you had to actually call their office, go through their automated answering system and then be placed on hold until you grew old and died while waiting for an actual human being to come on the line.  I admit that I like the idea of never having to listen to an orchestra play the Rolling Stones’ song “Satisfaction” again, but I doubt that I’m going to sign up for the new system.  Because if I did sign up, I’d have to create yet another password, and I absolutely do not want to do that.

Even though I’ve resisted online banking and am one of the few people in this country who still prefers to go to an actual store to shop rather than sit in my pajamas in front of my computer and simply order stuff that someone else has to deliver to my door, I still have way more passwords than I can handle now.  It would be easy if I could just create one password for everything, but the experts warn against that.  They also warn us not to create passwords based on the names of our pets or children, our birthdays, or something so obvious as “my password.”  Which means that I can’t make a password out of anything I can possibly remember. 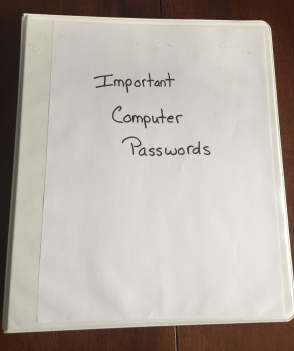 I’ve come up with my own system for “remembering” the passwords I have to use when I’m at home on my own computer.  I have a binder that I keep in my desk drawer, right under my computer monitor, clearly labeled, “Important Computer Passwords.”  My son, who does tech auditing for a living, has pointed out that there’s little sense in having passwords if I make it so convenient for everyone to find them.  But I think that if someone has taken the trouble to break into my home with the intention of accessing my computer accounts, the least I could do is make it convenient for them.  That way, they might not be so inclined to mess with my important stuff, like the profile on my Facebook page.

I have heard of online systems for storing and retrieving passwords, on what is called “the cloud.”  But I just don’t see how putting all of my passwords out in cyberspace is a good idea.  Aren’t the people who hack into websites also on cyberspace?  It seems to me that the idea of storing passwords on the cloud is riskier than having them in my notebook.  The chances of a hacker actually showing up at my house to look in my notebook are rather small, but I have already received several of the dreaded “security breach” notices from my credit card company, bank, and insurance company, who all insist on storing important information on the internet.  It seems to me that storing my passwords in cyberspace makes as much sense as me storing my Sunday roast in my dog’s supper dish and expecting her to ignore it.

So, for now, I will decline to join the system that lets me access my doctor’s office via cyberspace, at least until someone comes up with a way to keep that information safe without forcing me to create yet another password I have to worry about.  I know that makes me sound hopelessly old fashioned, and I probably am.  But I’d rather be on hold for thirty minutes than have to admit that, once again, I’ve forgotten my stupid password.

PS:  Many thanks to George, over at the excellent blog called The Off Key of Life, for the inspiration to write this post.