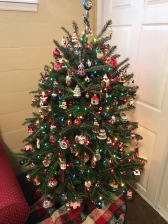 As my regular readers know, I hate being sick.  So I was deeply unhappy when I realized that the sore throat and stuffy nose I came down with last Monday wasn’t, as I had hoped, an allergic reaction to spending Sunday afternoon taking down our Christmas tree.  It was a real cold.  The good news was that I felt a little bit better with each passing day…until last night, when I began to lose my voice.  I couldn’t talk at all by this morning, so I went to the local urgent care clinic for help.

It turned out to be inflamed vocal cords which should go away soon, and I’m already feeling much better.  Partly because they gave me a steroid shot for the inflammation, but mostly because the staff that I dealt with at the clinic were so professional and kind.  They listened to what I had to say, answered my questions, and explained exactly what my treatment would be.  In short, they were ordinary people who took the time to do their job well, and that helped enormously.

I’ve reached the age where I’ve known too many good people who have died, and even more people who are mourning the loss of their own loved ones.  So it shouldn’t have been a shock when my husband received a text from the wife of our handyman telling us that he had died of a sudden heart attack.  But it was.

We’ve known Mike for many years, and liked him very much.  He did high-quality work, and was friendly, dependable, and the sort of person who could fix or build just about anything.  Mike did a lot of projects for us, and also worked on our son’s house, our daughter’s house and my mother’s house.  You don’t spend that much time with someone and not get to know him fairly well, especially someone who likes to talk, as Mike did.  He told us about his wife, whom he loved dearly, and about his beloved granddaughter, whom he adored.  We knew he loved his dogs, and was an avid hunter and fisherman.

One way or another, my husband spent a lot of time talking to Mike, asking for his advice on various projects and often just “shooting the breeze.”  I think it’s safe to say that the relationship between the two of them moved beyond employer/employee to real friendship.  At least I know that’s the way my husband felt.

I’m not sharing this because I’m looking for sympathy for our loss, because that should be reserved for Mike’s family and close friends, who are in deep mourning.  I’m sharing this because I think it’s important for us all to remember just how much good ordinary people doing their jobs well can do, and how much of a positive impact they can make on the people around them.

The people who get most of the attention aren’t really the important ones, in my opinion.  It’s people like Mike and the staff I encountered at the urgent care clinic who really count.  It’s the ones who are kind and honest, and who do their jobs to the best of their ability,  and who are always ready to lend a hand when needed who are the people who truly make the world a better place.  And I believe that they are the ones whose example the rest of us would do well to follow….