Patience may be a virtue, but it’s not one of mine.  I’m the sort who skips dessert and then steps on the scale to see how many pounds I’ve lost.  I wanted my new dog, Finn, to drop all of his annoying habits right away, even though he’s only one-year old.  (You’d think the fact that I’m sixty-one years old and still have almost all of my annoying habits would mean I’d be a little more patient with him.  But you’d be wrong.)  And when I planted this year’s tomato seedling, I immediately started planning the recipes I was going to make with this year’s bumper crop of tomatoes.

So now that my mom has made the decision to move into a retirement home, I’m ready to pack her up and move her in there as soon as possible….next week at the very latest.  And of course that’s not going to happen.

Never mind the fact that she’s going to be moving from a three-bedroom house (with a full basement and a garage) to a one-bedroom condo, which is going to require major down-sizing.  It’s going to be a huge task simply to decide which of her possessions she wants to take with her, never mind what to do with all the stuff she doesn’t want to take.  And then there’s all the chores that go with any move:  the change of address cards, shutting off utilities in the old house, hiring a mover, etc.  All of it takes time.

But the biggest problem is that the retirement community she’s selected has a waiting list, and we’ve been warned that it could be as long as a year before a unit opens up for her.  Which means that I’ve got too much time to spend worrying and fretting as I wait for this move to actually happen.

What if she has a major health issue in the next few months and no longer meets the “independent living” requirements?  What if we get rid of all her extra stuff and then she changes her mind about moving?  What if everyone who currently lives in the retirement home actually stays there for the next ten years, and a condo never becomes available?  There are so many things that could go wrong that my mind just reels…

But this, like so much in life, is something that I really can’t control.  Yes, I want to see my mother safe and happy in her new home, and I do think she’s made the right decision to move.  But the process isn’t going to go any faster if I fret and worry than it will if I manage to step back, take a deep breath, and let things work out however they happen to work out. 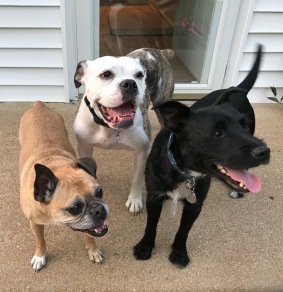 Because sometimes, I think, we just have to trust that once we’ve done everything we can to make something happen that it often does….if we can just wait a little while.  Finn may still annoy us now and then, but his behavior has improved enormously since he first moved in.  We kept my son’s dogs last week, and the three of them got along just great with no issues at all.  That’s progress.  And I may not have a bumper crop of tomatoes just yet, but I do have enough to make a tasty addition to the salad I’m serving with dinner tonight.

So maybe, just maybe, it’s time for me to admit that there’s some truth to that old saying, “good things come to those who wait.”  And then learn to do it with patience and trust….

It’s not as if I had never heard the term.  People have been talking about the “sandwich generation” for years.  And is not as if I didn’t know friends who were still talking care of their kids while dealing with a parent who couldn’t live independently anymore.  It’s just that I was naive enough to think that it would never happen to me.

I had the vague idea that my kids would graduate from college, then immediately find a terrific job and a great place to live.  I’d get to see them all the time, but I wouldn’t worry about them anymore.  As for my parents, I pictured them living happily on their own until they were at least in their mid-nineties, at which point they would depart from this world quickly and peacefully, knowing they had lived a full and satisfying life.  Looking back on it, I’m amazed I didn’t still believe in Santa Claus as well.

But then reality came knocking, and I learned that life doesn’t get less stressful or complicated when our kids become adults.  A father who slid slowly into the early stages of dementia before passing away; a mother-in-law who spent three years in a nursing home (in another state) before we lost her; and a father-in-law who died unexpectedly five weeks after we lost my mother-in-law and were still in deep grief over her death, all taught me that real life is challenging and messy in ways I had never even dreamed of.  And I’m still waiting for that magic moment when I stop worrying about my son and daughter.   My mother told me that would never happen, and now I know she was right.

Maybe it was just denial that kept me believing that my parents and in-laws would never require any real care from my husband and me, and that parenting was something that you did only for twenty years or so per child.  If so, I think that’s a defense mechanism that is shared by a lot of us.  Whenever I talk about some of these issues with friends whose kids are younger and whose parents are still alive, independent and healthy, they react just the way I used to:  with sincere, but distant, sympathy.  They can’t quite make themselves believe that this will ever happen to them.  I remember being that innocent.

I’m not going to lie.  This “sandwich generation” stuff can be hard.  Now that I’ve experienced it, I’m much more sympathetic to my friends who are going through the same thing, and often much worse.   Supportive friends help, and so does a sense of humor and the occasional glass of wine.  But mostly, I just remember that the alternative is worse.  I worry about my kids because I love them, and that isn’t going to change.   And I am very grateful for the time I have with my mother while she is still here, because I know once she is gone I will miss her just the way I miss my father and my in-laws.  Being in the sandwich generation may be challenging at times, but honestly, I want to stay in it for as long as I can.