Sanibel Island is my happy place.  I fell in love with the island the first time my husband and I visited in 1986.  I was pregnant with my daughter at the time, and appreciated the laid-back feeling of the island, which had no stop lights, no fast-food restaurants (unless you count the Dairy Queen) and no buildings over four-stories high.  The beach was natural, and full of shells.  There were just enough stores and restaurants for convenience and a huge nature preserve where we could spot all sorts of birds and even an alligator or two.  Sanibel provided exactly the relaxing and rejuvenating vacation we needed.

When our children were grade school, we began taking our family vacations on the island.  We booked only a four-night stay on our first trip down, because we worried the kids would get bored with the lack of theme parks and other kids’ activities.  But they loved it as much as we did.  My son became interested in photography and took tons of great photos, including one of an alligator on the beach. (We saw that only once, and it was safely returned to the Sanibel River.)  We’ve had many great vacations with our children, but my fondest memories are the times we spent together on Sanibel Island.

Our son and daughter are grown with families of their own, so now its usually just my husband and I when we visit the island.  There’s still the feeling of peace when we cross the causeway that connects Sanibel to the mainland, and catch that first sight of the island.  We have many favorite restaurants, and I always reserve at least two hours to browse through Gene’s Bookstore, which is one of the best bookstores I’ve ever visited.  We don’t own any property on Sanibel, but both of us think of the island as our second home.

As anyone with access to the news knows, Florida was recently devastated by Hurricane Ian, and Sanibel Island took a direct hit.  It was completely engulfed with water as well as battered by category-4 winds.  Many buildings are just plain gone, and the ones that are still standing have severe damage.  The causeway, which is the only access to the island, collapsed in at least four places.  There is no power, which means deadly mold will grow in the water-logged buildings.  People had to be air-lifted off the island, and most home-owners have lost everything. There are at least two confirmed deaths.

It’s hard for me, from the safety of my home in the MidWest, to wrap my mind around this tragedy that happened in Sanibel and across much of Southwest Florida.  I see the photos from drones and try hard to identify familiar landmarks.  I can only imagine the pain of those who lived and worked on the island, and the desperation they must feel as they wonder, “what now?”  I heard that the city of Sanibel is setting up an official fund for donations, and I hope that people who are able give generously.  I know I will. 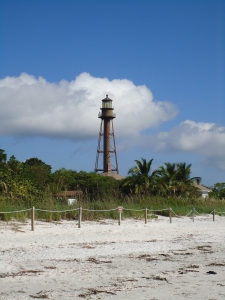 I also know that eventually, the island will come back.  People will rebuild as best they can, and the time will come when the island will be open for visitors again.  It won’t look the same, because hurricanes change the actual landscape of islands.  The “old Florida” hotels with their little framed houses won’t be rebuilt that way, because they are far too vulnerable to strong hurricanes.  Many things that made Sanibel so charming are gone forever.  But I also know that when Sanibel finally recovers, it will still be a very special place.  The people who live there, work there, and visit regularly will make sure of that, because we know that the spirit of Sanibel is too strong to be destroyed.  And that’s why we love it so much….

This site uses Akismet to reduce spam. Learn how your comment data is processed.