Like so many things this year, the big party we were planning to celebrate my mother’s 90th birthday was cancelled.  Turning ninety is sort of a big deal, so we had hoped to rent a venue and invite extended family and all of Mom’s friends to stop by for cake, drinks and snacks.  Initially, Mom had told us there was no need to make such a fuss, but as the lock-down wore on and we had to cancel family gathering after family gathering, she began to really look forward to her big party.  It was going to be her chance to finally see everyone again, altogether in the same place.

When it became apparent that the virus wasn’t going to cooperate with our original plans, we told Mom that we were going to have to put off the big party for a while longer, but that we would have a small dinner gathering for our immediate family instead.  Since some of our immediate family lives out-of-state, my sister volunteered to host it in her yard so we could all stay outside and socially distance.  Everything was fine until we saw the weather forecast for the day of the party:  98 degrees with a heat index of  at least 105.  We waited as long as possible, hoping that the forecast would change, but it didn’t.  And since there is no way it would be safe for Mom to be out in that kind of heat for any length of time, we had to cancel again.

My Mom told us she understood, and I knew that she did.  But I also knew how deeply disappointed she was, and I didn’t blame her one bit.  So my husband and I talked it over and came up with an alternative plan:  we would have Mom over to our yard early in the morning for breakfast and include only our kids and grandchildren.  It wasn’t anywhere close to the celebration we had promised her, but it was the best we could do in the circumstances.  I only hoped it would be enough.

And you know what?  It was enough.  We loaded the patio table with breakfast food and drinks, hooked up some fans to keep it as cool as possible, and filled the wading pool for our grandson to play in.  Our newborn granddaughter even joined us outside for a little while before going into back into air-conditioned house for her morning nap.  Mom opened her gifts, we all enjoyed each other’s company, and we finished before the temperature became unbearably hot. 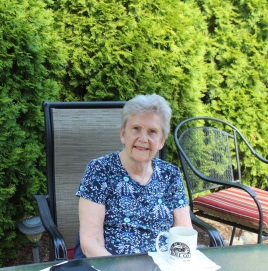 Someday, we will throw Mom the big birthday celebration we had originally planned, even if it ends up being for her 91st birthday instead.  But I’m so glad that we had our small get-together in honor of her 90th birthday, and that Mom got to celebrate with at least some of her family.  In these times when so many plans have been cancelled, I think it’s important to be as flexible as we possibly can and to adapt our plans to fit the circumstances.  As my grandmother used to tell me, “Sometimes it’s best to just make do with what you have, and be grateful for it.”  Wise words for sure….