No doubt about it, there are certain advantages to aging.  And I’m not talking about just the wisdom and self-acceptance that most of us achieve as we grow older.  I’m talking about the fact that old people can get away with stuff that younger people can’t.  For example, when I take 88-year old mother out to eat, she has no problem letting the waiter know the very second she’s ready to order, even if that means calling across the room to attract his attention.  I have yet to see a waiter take offense.  Instead, all she gets is a tolerant smile and sometimes even a friendly pat on the shoulder.  Somehow, I don’t think that would be the response if my mother wasn’t a textbook example of a “cute little old lady.”

Even at age 60, I have found that my age can be an advantage.  I have heard of people who have a “resting bitch face,” but personally, I have always had what can only be called a “resting stupid face.”  Meaning that when I don’t have a specific expression on my face, I tend to look as if I’m just a few bricks short of a load.  And that has served me well, particularly when I pair it with the words, “But I don’t understand.”  I can’t tell you how many people have done what I’ve wanted just because they couldn’t be bothered to explain the rules to someone they believed wasn’t bright enough to understand them.

But now that I have reached a certain age, I’ve found that the only thing better than having a “resting stupid face” is having an old resting stupid face.  If I’m having a disagreement with someone, (particularly someone younger) I have found that my most effective response is to simply stand there and look at them in a perplexed sort of way.  Sooner or later, they tend to give in, even if they do sigh loudly and roll their eyes at the same time.

Still, I’m only human, and there are times when I don’t really want to feel quite so old.  I miss the vitality of my younger days, would give anything to have the perfect eyesight, firm skin and boundless energy I once took for granted.  Luckily, I’ve discovered a fool-proof way to make me feel young again, and it doesn’t require any expensive or painful surgical procedures.  When I want to feel young, all I have to do is spend time with some of my treasured, life-long friends.  Seriously.

Maybe it’s because they knew me “way back when,” or maybe it’s because when I look at them I still see the young person they once were.  But for whatever reason, when I’m with my old friends, the years just melt away and I truly feel young again.  And it isn’t long before I’m also acting as if I was young:  laughing hysterically at our silly jokes, staying up late because no one wants the evening to end, and most of all, feeling that as long as I have my friends by my side, there’s nothing I can’t handle.

Aging does have it’s advantages, but every once in a while, I need my “old” friends to remind me of what it was like to be young….. 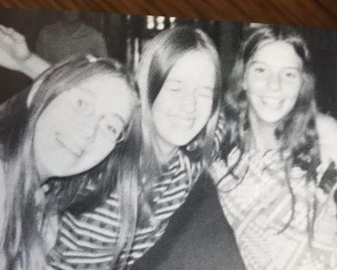