When I was pregnant with my son, I was absolutely convinced I was going to have a girl. I was going to name her Sarah Marie, and I believed that she would have red hair (like my husband before he went gray) and green eyes.  I was so sure of all this that I was actually shocked when the doctor put my son in my arms for the first time and said, “Congratulations, it’s a boy!”  Not disappointed, mind you…I loved my son completely and absolutely from the moment he was born….but definitely surprised.  And as I rocked my newborn son, a little part of me said good-by to Sarah Marie.

Honestly, that incident should have prepared me for what parenting is really all about.

As parents, we try so hard to make the right decisions for our children; to steer them onto the paths we think they should take and to instill our values and our knowledge in them.  And that’s as it should be.  But sometimes when we do that, I think we also make the mistake of thinking that our children will turn out to be exactly who we shaped them to be, and that they will always share our interests and always do things just the way we taught them.   But they rarely, if ever, follow exactly in our footsteps and sometimes set off on paths we never even imagined.  And that’s as it should be, too.

As a writer, I was thrilled when my son began writing stories for fun when he was about ten years old.  He was very good at it.  On some level, I suppose I even hoped he might grow up to have the commercially successful writing career that had eluded me.  But eventually he stopped writing those stories, preferring to spend his time playing sports and video games.  I remember being disappointed at the amount of time he would spend in front a computer when he could, in my opinion, be doing much more productive things.

And you know what?  That same son is now working happily and successfully in the field of technology.  He may not have taken the path I had envisioned for him, but he followed his own heart and found the path that was right for him. 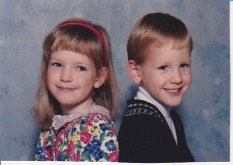 Neither my son or daughter turned out exactly the way I had pictured, and neither share every single one of my values and interests.  Instead, they did exactly what they were supposed to do and used the love, experience and knowledge they were raised with as a foundation upon which to build their own lives.  They are changing and evolving into exactly the persons they were meant to be.

My son surprised me, all those years ago in the delivery room, by turning out to be a bit different from what I had expected.  Honestly, both he and his sister still surprise me now and then.  And as their mother, I wouldn’t have it any other way…..

86 thoughts on “Raise Them Up”