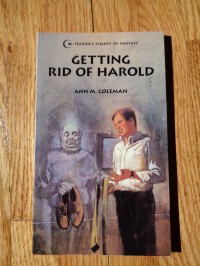 When I was young and naive enough to believe I had a good shot at making a living as a free-lance writer, I attended lots of writer’s workshops.  They were always interesting, and some of the tips helped me place articles with local magazines and neighborhood newspapers.  I never did make a lot of money as a writer…my largest claim to fame was a short article in Bride’s magazine and the publication of one (count it, one) children’s book.  Still, I learned a lot in those workshops about writing, and especially about the delicate balance between giving an editor whatever he or she wants and developing my own unique “voice.”

The voice of an author is what distinguishes one writer’s work from everyone else’s.  It is what comes out when a writer taps into his or her deepest beliefs, inner-most fears, cherished dreams, etc.  It communicates the unique perspective of the world that each of us have and that writers share through their written words.  And for me, finding that voice was always a struggle.  I could figure out what my editor wanted and deliver exactly that, no problem.  But writing from my heart was a whole other matter and I never really managed to do it.

Fast forward to almost three years ago, when I started writing this blog.  At first I was terrified of putting my writing on a public forum where everyone and anyone could both read and comment on it.  My inner critic went into overdrive, and I poured over my posts before actually publishing them, searching for flaws and carefully deleting anything that I thought could be offensive or misinterpreted.  Luckily, my readers were a small but polite group who mostly offered encouragement and the expected criticism and rejection never materialized.

I gained more confidence with each post, slowly but surely learning to ignore my inner critic and to put my true thoughts and feelings on my blog without quite so much worry and angst.  I began to write about whatever subject was near to my heart, and I learned that honesty (as long as it is not also hateful or hurtful) is perfectly okay.  It took me a while to recognize it, but I had finally found my writing “voice.”  My blog has brought me many gifts, but that is by far the one I appreciate the most.

Even better, I have discovered that finding my writing voice has actually given me more confidence to speak my mind in person.  I am no longer nearly so inclined to tell others only what I know they want to hear.  When asked for my opinion, it has become almost natural for me to share my true thoughts and feelings, even when I know that others around me will probably disagree with what I have to say.  My old fear of rejection is fading fast, and that’s a very good thing.

I know that not everyone is a writer, but I do believe that everyone has a voice and that  their voice, like mine, deserves to be heard.  And I hope that one way or another, we each find a way to make that happen.