When I was a child, I wanted a horse more than anything in the world.  Unfortunately, I spent the first eleven years of my life living in a city with no horse stables in sight, so I knew that the chances of getting a horse of my own were slim.   I learned to make do with the china horses I purchased from the local variety store each time I saved enough of my weekly allowance.  Eventually, I collected a whole herd of little horses that were proudly displayed on a bookshelf in my bedroom.  Sometimes I made the mistake of trying to play with them, but they were so fragile that the play sessions usually resulted in a “thinning of the herd.”

We moved to rural Kansas when I turned eleven, and I was thrilled to finally get my first real horse.  Gypsy was beautiful, but she wasn’t particularly nice, and it wasn’t long before she had me thoroughly intimidated.  Luckily, we were able to sell Gypsy and buy Tony, a sturdy Welsh pony whose goodwill and common sense allowed me to learn what owning and riding my own horse was really all about.  Eventually, I outgrew Tony and got Prince, the world’s most wonderful horse, whom I loved and enjoyed until his death seventeen years later.

I kept my collection of china horses, displaying them for years after I had acquired a real horse.  I even took a few of them to college with me, where they stood on a shelf above my desk.  If my friends thought it was odd for a college woman to decorate her dorm room with horse figures, they were kind enough not to say so.  The horses (not made of china, I finally realized, but probably ceramic or porcelain) still broke easily, so I lost one or two each time I moved them.  Later, when my husband and I set up our first home together, I finally packed away the last of the herd in a box marked “keepsakes.”

I think it was about five years ago that I first saw a tiny horse figure in an antique shop, just like the ones I used to collect as a child, and I bought it.  Then I unpacked the four horses I had left in my keepsake box and placed them, discreetly, on the bottom shelf of the TV stand in our bedroom.  I have since found a few more horses for sale in shops where antiques and collectibles are sold and brought them home to join the herd.  Last year, I boldly moved them to the top of the bookshelf in my bedroom, where my husband has learned to tolerate them. 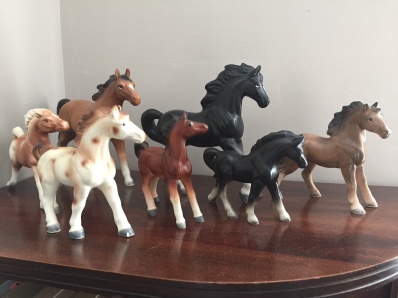 They may look like a group of cheap horse figurines, but to me, they are so much more.  They remind me of my childhood dream of owning a horse, and of how that dream actually came true.  They remind me that dreams don’t always match reality, but that if I can find the courage to persevere, sometimes reality is just as good, if not better, than the dream.

I have come full circle now, once again living in a large city where owning a horse isn’t practical.  So once again, I am making do with my little collection of “china” horses.  Only this time, they are more than enough.

(Many thanks to Greg over at Almost Iowa  for the writing prompt, “My Stuff.”)

74 thoughts on “My China Horses”