I was idly scrolling down my Facebook news feed yesterday when I spotted a couple of photos my daughter had posted of my son and herself, all dressed up for Halloween.  They were taken when my children were very young, in the preschool and kindergarten years, but when I looked at the pictures, I was instantly flooded with very specific memories of those two Halloweens. 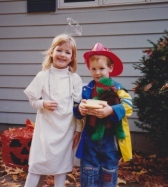 I remembered that my daughter’s angel costume had been borrowed from church  (one of the costumes used for the annual Christmas program), and I remembered how grateful I was that my son wanted to be a fireman two years in a row.  I wasn’t one of those moms who enjoyed putting together elaborate costumes for my children, which also explains why my daughter’s ballerina costume in the second picture is nothing more than her dance class outfit with a shirt underneath the tutu to keep her warm.

I remembered how we carved the pumpkins just before eating dinner, so that our Jack-0-Lanterns would be ready for any early arrivals.  I remember how my husband and I took turns being the parent who stayed at home to greet trick-or-treaters, and the parent who took our kids around the neighborhood.  I remember the pumpkin sugar cookies I made,  dying the frosting orange and then adding just a touch of green for the pumpkin stem.  (I may not have been big on costumes, but I put an effort into those Halloween cookies.)  Mostly I remember the barely contained excitement of my son and daughter when the big night finally arrived, and for once, getting a lot of candy wasn’t just allowed, it was actually encouraged.

When my children were young, I was a stay-at-home mom who was struggling to make a go of a free-lance writing career.  Sometimes I felt a bit overwhelmed by the constant demands on my time, the never-ending cycle of laundry, meals, dirty diapers, and trying to keep two very active little people safe, healthy, and happy.  Occasionally I felt isolated and lonely, missing the company of my co-workers and the way I took easy access to adult conversation for granted.  Older women, especially my mom, often told me to treasure the years when my children were young, and warned me that they would be over far too soon.  “In the blink of an eye,” they said, “this will all be gone.” 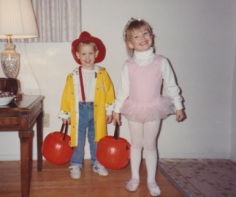 I’m ashamed to say that there were times when I didn’t quite believe them, because time didn’t seem to be moving all that fast to me.  But now my daughter is a 30-year old married woman, and my son is a 27-year old man who will be married in less than two weeks.  It seems like only yesterday that they were a little ballerina and fireman, and so excited for Halloween they could hardly stand still.  How can that be?  How in the world did time move so very quickly?  I remember those sweet days of their early childhood so very well, but I guess I must have blinked…..