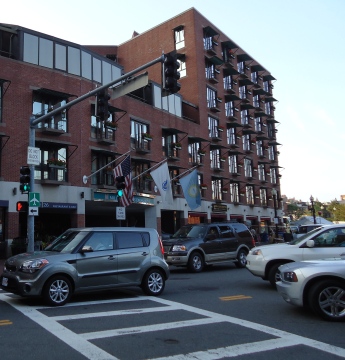 As anyone who knows me is well aware, I get confused very easily.  So the other afternoon when I was using the drive-up ATM near my favorite grocery store, I somehow managed to make a wrong turn, thereby exiting the parking lot through an entrance lane.  Before I could drive off, a woman in a large SUV pulled up in front of me and blocked my exit. She stayed there for a couple of minutes, glaring and saying angry words I couldn’t hear (and probably didn’t want to hear) before shaking her fist at me and then driving on past the entrance. Part of me was tempted to follow her and explain that it was an accident, but I knew that wasn’t a good idea.  What I didn’t get was why she didn’t simply let me make the turn out of the parking lot, which would have immediately cleared the way for her to enter.  I didn’t understand why it was so important to her to let me know just how wrong I was and how angry she was.  Whatever happened to days of just shaking our head and muttering “idiot” when we saw another driver doing something that was stupid, but not dangerous?

And it’s not as if the anger is limited to our driving time.  Recently, a post popped up on my Facebook feed in which a mother was complaining about how a boy on her daughter’s school bus was relentlessly teasing her daughter about her new glasses, which had her daughter coming home in tears.  Like any mother, I understood how painful it is to see your child’s feelings hurt, but I was still shocked at some of the responses to the post.  While most of them, sensibly, advised talking to the bus driver or school principal, several of them took it much further, calling the boy all sorts of nasty names and suggesting various types of revenge.  One person even advised that the girl “punch the boy in the face and kick him hard in the crotch.”  Seriously?  Adults advising one child to physically attack another child?

It seems that almost everywhere I look these days, I see frustration, anger and even outright aggression, and it’s more than a little depressing.  Road rage, parents screaming at umpires during Little League games, news accounts of violent protests and riots, etc. have almost become the norm.  The internet is full of “keyboard warriors” who happily attack anyone who dares to disagree with them, or who does something that they don’t approve of.  “Name and shame” has become a battle cry for those who feel the need to teach others a lesson, mostly for behaving in a way that they feel is not acceptable.  Sadly, there seems to be no shame in publicly attacking other people, and the irony of reacting to hatred with even more hatred is lost on far too many of us.

I don’t pretent to know why so many people are so angry.  And I don’t pretend that I don’t have angry moments myself.  But I do know that anger is rarely the answer to any problem, large or small.  And I know that while we may not be able to choose when we become angry, we most certainly can choose whether or not we act on that anger.  We can choose to express our anger, without any thought or consideration to the harm that it does, or we can choose to let our anger be the trigger that causes us to address an injustice in the kind of rational manner that might actually bring about change for the better.  Controlling our tempers is not a sign of weakness, but rather a sign of maturity and the willingness to work through our problems toward a productive result.

Sometimes, when we are upset, it really is better just to keep it to ourselves.  Because the world doesn’t need our anger, as it has more than enough anger already.  What the world needs is our patience, our understanding, our courage, and most important of all, our kindness.