One way or another, I spend a big chunk of my life these days in the company of dogs.  To begin with, I share my home with Lucy, a fourteen-year old dog who has always operated with a total disregard for household rules.  And while old age means she can no longer move as quickly or hear as well as she used to, I still walked into our dining room shortly after we had finished this year’s Easter brunch to find her standing calmly on our dining room table, polishing off the rest of the dessert tray.  Just for the record, she seemed to favor the little egg-shaped cakes over the lemon squares, although it was obvious that she had sampled both.  She may be old, but she still knows an opportunity when she sees it.

Besides living with Lucy, I often help take care of my children’s dogs, which I’m more than happy to do.  My daughter and her husband have Harley, a chihuahua mix who adores her immediate circle of friends and family and has absolutely no use for anyone else. In her own home, she’s happy to simply ignore people she doesn’t like, but walking her is a challenge.  She may love her walks, but she also loves barking at anyone and anything she sees, and flies into an absolute rage when she spots an approaching car.  It doesn’t seem to occur to her that five pounds of furious dog is no match for a thousand pounds of moving steel, and I’m not about to let her learn that lesson the hard way. 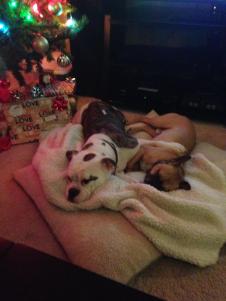 My son and his fiancé have Frank, a pug mix, and Roxy, an English Bulldog.  I know Frank well since he lived with us for a while right after my son graduated from college, and have come to love Roxy, too.  Roxy and Frank have become good friends in the past couple of years, although there have been a few necessary adjustments.  Unlike most dogs, Frank loves to wear sweaters (probably because he doesn’t tolerate the cold very well), but Roxy has a problem with that.  One cold December morning, my son sent the dogs outside with Frank proudly sporting a brand-new Christmas sweater.  Ten minutes later, the dogs came back in.  Frank was wearing only his fur, while Roxy had Frank’s Christmas sweater dangling from her teeth.  Clearly, Roxy is a dog who knows how to take matters into her own paws, and Frank has learned to live without sweaters. 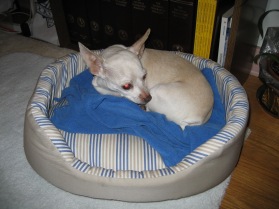 My mother has Penny, a sweet and elderly chihuahua who was rescued from a hoarding situation about nine years ago, which means that altogether, my immediate family has five dogs.  I spend time with all of them, trimming nails and filling in as needed for potty breaks, walks and meals.  For the past fourteen years, I have also been volunteering regularly at the Humane Society where I have logged in hundreds of miles walking shelter dogs.  I’ve spent hours patiently coaxing a shy dog out of its run, or working to teach a rowdy dog basic manners, or trying to calm a dog who is clearly stressed out.

Although I’ve always loved dogs, I honestly don’t think I ever planned to have quite so much of my life revolve around them.  There was a time when I toyed with the idea of being a  veterinarian or a vet tech, but my habit of fainting at the sight of blood sort of ruled that out.  Still, I can’t say I’m unhappy with the way things have turned out.  It’s true that in some ways, my life has certainly “gone to the dogs,” but as far as I’m concerned, they’re worth it.