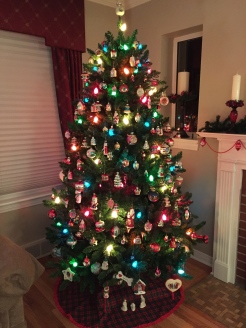 The Christmas season has begun, and that’s just fine with me.  I’m one of those people who loves listening to Christmas music (yes, even in the grocery store), who puts up two Christmas trees and covers her house with Christmas decorations that are more tacky than tasteful, who enjoys baking Christmas cookies and even wrapping the presents.  If I could figure out a way to get out of actually having to shop (and pay for) those presents, I would be a completely happy camper this time of the year.

Sadly, the end of this Christmas season will coincide with the beginning of  a new season that I will definitely NOT enjoy:  the 2016 election season.  I hate all election years, but the Presidential elections are the worst as they seem to take the political ugliness to the highest possible level.  We’re not even done with the year 2015 yet, and I’m already seeing the hateful editorials in newspapers, the snarky Facebook posts, and the mean-spirited bumper stickers and yard signs.

I have no problem at all with people who have strong political convictions, and I actually admire the commitment of people who donate to and/or work on the election campaigns of a candidate they believe in. If you believe in a cause, you should be willing to support it with your time and money, in my opinion.   But I do have a problem, a huge problem, with people using their political beliefs as an excuse to to ridicule and attack those who don’t happen to share them.

Personally, I have never met a single person who has changed their politics just because someone else has made fun of them.  People don’t read a scathing blog post or hateful Facebook post and suddenly have an epiphany, see the error of their ways and resolve to vote for the other political party from now on.  It’s true that people whose views are attacked often enough can be silenced, choosing to just keep quiet rather than engage in ugly arguments, but I very much doubt that they have changed their beliefs (or the way they vote) at all.

I admit that when I read or hear something political that I find really offensive, there is always a small part of me that wants to lash out and let them know in no uncertain terms just how very wrong they are.  But I try hard not to do that, because lashing out through ridicule, snide put-downs, name-calling, etc. doesn’t help a thing, and actually does a lot of harm.  It makes the other person feel attacked, which means there is absolutely no hope they are going to listen to anything I have to say.  It’s completely possible for people with different points of views, even on something as important as politics, to have a polite and informative discussion about it, but only if we remember to always speak to the other person exactly as we want them to speak to us.

I know it’s naive of me to hope that this political season will be any nicer or more civilized than the ones before it, or that the candidates and their supporters will really treat each other with the respect and dignity that every human being deserves.  So all I can do is enjoy the rest of my Christmas season, and focus on its true message of hope, love and peace.  And then do my best to keep that focus through the upcoming election year…..

23 thoughts on “Tis The Season”