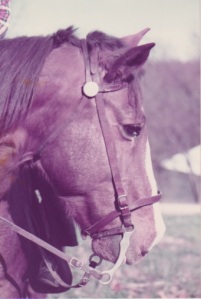 Prince is not a name I would ever have chosen for my horse.  Having grown up watching “Fury” and reading books like “Midnight” and “Black Beauty,” I had always dreamed of having a horse that was spirited and beautiful, and I wanted it to be named accordingly.  But Prince was eight years old when I got him and already knew his name, so I had no choice but to let him keep it.

He was handsome, with a copper-colored coat, a black mane and tail, and a white stripe down the middle of his face.  He was a calm, easy-going horse rather than a spirited one, and since I was fourteen and inexperienced when I got him, that was a good thing.  My first horse, Gypsy, had been very spirited, and after she had bitten, kicked, and bucked me off, I was more than ready to appreciate a horse who actually seemed to like people.

Honestly, Prince liked people more than any horse I have ever known.  I got him a couple years after my family had moved to a small town in Kansas, and kept him at a small stable where he had access to a large pasture.  Everyone else at the stable had to spend some time catching their horses when they wanted to ride them.  I simply called Prince and he came trotting right over, eager to see if I had some food for him, which I always did.  He was easy to ride as long as I made it clear that he wasn’t allowed to stop and graze along the way.  Even when I wasn’t feeding or riding him, Prince always stayed near me when I was at at stable, occasionally  resting his head on my shoulder or nudging me hopefully to see if I would give him a treat.

His only real vice was that he was a pig about food, and the only way he would ever hurt anyone is if they made the mistake of standing between him and something he wanted to eat.  Prince believed that the shortest distance between him and his next meal was a straight line, and if someone was standing in his way, he would not hesitate to plow right into them.  But other than that, he was so calm and friendly that just about anybody could ride him, and I had more than one friend get over their fear of horses just by being around him.

I admit I spoiled him a little, at least by the standards of some people.  He loved apples, but would only eat one if I “started” it for him.  That meant I had to bite a chunk of it off first, give him the chunk, then hold the apple while he took a bite himself, and then finally he would take what was left of the apple and eat that.  He also expected me to swat away the giant horse flies that sometimes landed on him and bit him when we were riding, even if that meant dismounting to swat one off of his leg.  I would be lying if I said the more experienced horsemen I sometimes rode with were impressed with the way I handled my horse.

Prince came into my life when I was fourteen and he was eight, and he stayed a part of it for seventeen years.  When my family moved to southern Illinois, we took him with us, even though I was heading off to college in  Iowa.  When I married and moved to St. Louis, I moved Prince to a nearby farm in Missouri.  By that time it was sometimes hard to pay all the expenses that come with owning a horse, but I never once considered selling him.

We had been through so much together.  When my teenage years got a bit painful or confusing, I could always find peace by going to the stable and spending time with Prince.  Riding him on my breaks home from college was always something to look forward to, and later, when I moved back to the large city of St. Louis, I treasured my weekend rides on Prince out in the country.  He was a constant in my life during a time when almost everything else was changing so quickly.

I had to say goodbye to Prince when he as twenty five years old and his arthritis made it impossible for him to move around freely anymore.  I knew it was time to let him go when just walking across his stall caused him real pain.  It was one of the hardest decisions I have ever made, and I still miss him, all these years later.  And even though I didn’t realize it when I first got him, his name fit him perfectly.  He really was a prince of a horse.