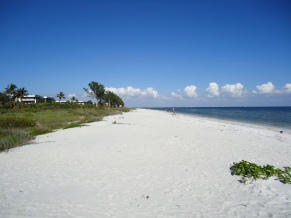 My husband and I are hoping to take a trip to Florida in a couple of weeks, as a way to celebrate his 60th birthday and to unwind from the whirlwind of our daughter’s recent wedding. Our plan is to spend the week doing exactly what we want to do, when we want to do it, which means we will probably spend lots of time walking the beach, collecting shells, and eating way too much food.  Once we get there, it should be very relaxing.  And that’s a good thing, because I know from long experience that getting there will be anything but relaxing.

We’re planning to fly to Florida, which is stressful enough all by itself.  I’m old enough to remember the days when flying was actually fun–a special treat for special occasions.  We even dressed up a bit before we went to the airport.  But these days, between the necessary security measures and the tiny seats on crowded planes, flying is more like visiting someone in jail and then boarding a Greyhound bus. And I swear I have seen some people in the airport wearing pajamas.

But in my family, the stress begins long before we even get to the airport.  My husband and I are both terrific worriers, and I have come to realize that one of my husband’s main worries in life is missing his plane.  The night before we leave for a trip, we usually go to bed rather late, what with all the packing, last minute instructions for dog and house sitter, etc.  Throughout the night, we wake up at least once an hour from the worry that we might oversleep (because it really is possible that the alarm clock could pick that particular night to break down).

Then we get up bright and early, rush through our morning showers, throw our suitcases in the car and head for the airport.  On the drive there, my husband curses at every single red light and mutters dark comments under his breath about all the other people who are inconsiderate enough to be out driving on the streets when we have a plane to catch.  When we finally reach the airport, he drops me off at the curb to check in our two huge and heavy suitcases by myself while he parks the car, because “it’s quicker that way.”

We usually meet up again at the security line, where he spends the whole time trying to estimate how long it will take us to get through the security check point and whether or not we will have to run for our gate once we are through it.  He removes his belt, shoes, and watch while waiting in line just to save time.  And once we are finally through security, we anxiously check the departure time for our flight and realize we have at least two hours to kill before boarding time.  That’s when I buy a magazine and a Diet Coke and settle in for a nice long wait.  It’s our vacation routine, and I know better than to complain about it.

Because I know there is a reason for my husband’s madness.  Once we scheduled a vacation to Florida on January 1st, and our flight was supposed to leave at 8:45 in the morning.  That was the one time I actually tried to talk my husband into waiting a bit before we went to the airport, because I figured very few other people were going to be flying early on the morning after New Year’s Eve.  Luckily, I lost that argument, because when we arrived at the airport at 6:15 in the morning, we were greeted by the sight of a check-in line that stretched out the door, and a security line that snaked back and forth across the lobby three times.

As we stood in line, people all around us were complaining about how they were missing their flights, but we, for once, were calm.  We knew we had gotten there early enough to easily make our flight, despite the long lines.  My husband was vindicated, and I was confident that I would have time to buy my Diet Coke once we got through security.  Sometimes excessive worrying pays off.