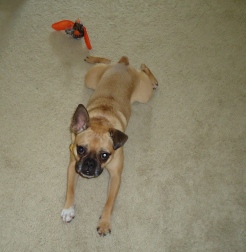 I still remember how upset I was when my son, who was then in his Junior year of college, called me to tell me he had acquired a dog.  At the time he was living  200 miles from home in an apartment building that did not allow dogs, was a full-time student, and also played racquetball for the university, which required some travel on weekends.  I didn’t see how he could possibly provide a good home for a dog, and as a volunteer at the local Humane Society, I knew how often dogs that are bought or adopted on impulse are turned in at animal shelters.  My son got quite an earful as I rattled off all the reasons why adding Frankie to his life was not a good idea for either of them.

When I calmed down enough to listen to him, my son told me that Frankie had desperately needed a new home, as the person who was listing him for free on Craig’s List (always a horrible idea for any animal) said that he had been returned to the breeder after being attacked by another dog, and had spent the previous, very cold, winter living in an outdoor run.  When my son picked him up, he was scarred, filthy and terrified. That made me agree that my son had done the right thing to rescue Frankie out of that situation, but I still didn’t believe that he should keep the dog.  I told him not to expect any help from us, unless he wanted to find Frankie another home, in which case I’d pull in every favor I had coming to make sure he found a good and loving home this time. 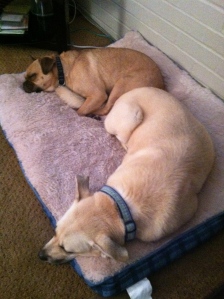 But my son was determined to keep his new dog.  He moved to another apartment building that allowed dogs, took Frankie to the vet to have him neutered, wormed and vaccinated, and bought all the necessary supplies.  We met Frankie for the first time when my son brought him home for Christmas break, and I had to admit that he was awfully cute and very sweet.  I was determined not to get attached to the little guy, but I failed miserably.  Even Lucy, who as a rule hated having any dog other than Sandy in her house, eventually made friends with Frankie.  As long as he lets her be the boss, (and he does) they get along quite well. 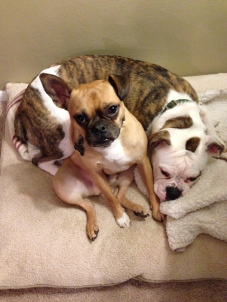 Frankie lived with us for about a year after my son graduated from college, until my son bought his own house and moved into it, taking Frankie with him. By then, I liked Frankie so much that I was secretly hoping he would leave Frankie with us, and I did mention how lonely I thought Frankie would be since my son and his girlfriend would be at work all day.  Sadly for me, but happily for Frankie, they solved that problem by adopting another dog to keep him company. Frankie bonded with his new sister, Roxy, very quickly, and they are now best friends.

I still see Frankie often, as my son lives close by and I am often the designated dog-sitter, so I get to enjoy Frankie’s lively, playful personality.  He’s not the smartest dog around, but he’s happy, loving, and always ready for a snuggle.  And I just love the joyous, proud way that he prances along on his walks as if he is quite sure he’s on his way to somewhere wonderful. I have told my son that if for any reason he can no longer keep Frankie, he is coming back to live with us.  It’s painful for me to admit it, but my son was right and I was wrong:  Frankie definitely belongs in our family. 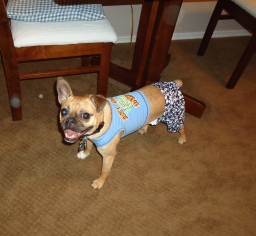 12 thoughts on “Sometimes It’s Right To Be Wrong”