It’s been many years since my grandfather died, but today is his birthday, so I suppose it’s only natural that I should find myself thinking about him.  He was a small man with a gentle, unassuming manner, and unlike the rest of my family, he wasn’t much of a talker.  He lived, worked, and raised his family in the same neighborhood he was born in, practicing dentistry for forty-eight years in an office that was across the street from the house he lived in as a child. 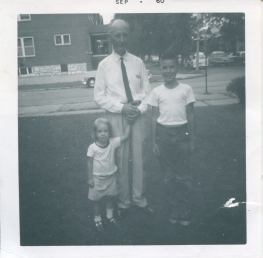 At family gatherings he could usually be found in the kitchen, seated at the table with the grandkids, drawing, playing games, or showing us how to make rows of little soldiers with his manual typewriter.  He was infinitely patient with us, and always encouraging.  If I couldn’t think of something to draw, he would simply look at my blank, white piece of paper and tell me that I had made a fine picture of a polar bear in a snow storm.  He was a natural with children, and always ready to accept an invitation to a make-believe tea party.

Shortly after marrying my grandmother, he moved into a two-bedroom brick bungalow on an unpaved street on what was then the outer edge of the city, where he lived for over fifty years.  Those who knew him then swore they had seen him sitting quietly in the back yard, holding out breadcrumbs for the wild birds, which would actually eat them out of his hand.  By the time I came along, the neighborhood around my grandfather’s house had become very urban, but he still put out bread crumbs each morning for the sparrows who gathered on his back porch, chirping in anticipation.

My grandfather had a very strong, if somewhat old-fashioned, sense of what was proper, and he stuck to it religiously.  He wore a suit every day, even after he retired from his dental practice.  His idea of casual attire was to remove his jacket and roll up his shirt sleeves.  Once, I saw him putting on his hat and suit jacket as he was heading out the back door, and asked him where he was going. He answered,  “I’m going to take out the trash.”  He didn’t understand, or care to understand, the more casual culture that surrounded him in his senior years, and continued to refer to almost everyone as a lady or a gentleman long after those terms had gone out of style.

His dental practice was very busy, but not exactly profitable, as my grandfather rarely raised his rates.  He knew that most of his patients could not afford to pay very much for their dental care, and he charged them accordingly.  “Doc Jones” was well known and liked in his neighborhood, and for good reason.  I don’t think he ever felt that he was making a personal sacrifice by keeping his rates low, as he lived very modestly by choice.  His life consisted of his dental practice, his family, his friends, and his church, and he seemed quite content.

Sometimes, when my life seems to be a bit too complicated or I am unhappy because I think I need to have more of this or that, I try to think of my grandfather and the simple way that he lived his life, and to use it as an example for my own.  Because I can’t really think of a better role model…..

23 thoughts on “A Life Well Lived”