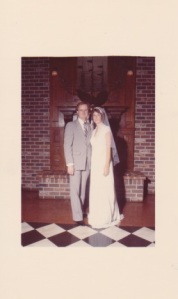 It’s impossible to reach middle age without also reaching some rather significant milestones in life, and I’ve had my share of big ones (graduations, becoming a mother, publishing a book) and small ones (shedding the extra fifteen pounds I’d carried around for decades, starting this blog, etc.)  This weekend, I’ll be reaching another large milestone, because Sunday is my 35th wedding anniversary, and I don’t think that managing to stay happily married for over three decades is any small feat.

When I think back to my wedding day, which was memorable mostly for the record-breaking heat of 110 degrees with a heat index of 120 degrees, I honestly can’t believe that it was thirty-five years ago.  The time has just flown by, much faster than I ever could have imagined.  We had planned to celebrate with a trip to Ireland and England, but then my daughter and her boyfriend decided that this would be a good year to get married, and the thought of financing both a wedding and an overseas vacation didn’t seem like such a good idea.  (We hope to go next year, instead.  Who says you can’t make a big deal out of a 36th wedding anniversary?)

I’ve learned a lot of things in the past thirty five years, and most of it has to do with the delicate art of compromise.  I am a minimalist who gets nervous when I look around a room and see too much stuff, while my husband is what can best be described as a “keeper.”  We learned early on in our marriage that separate closets were a must.  Our child-raising styles were similar, thank goodness, but our decorating tastes were not, and that became one of the many areas where we learned to compromise.  I said “yes” to the plaid sofa and love seat combo in our first apartment, but “no” to the velvet tapestry of the dogs playing poker.  It took awhile, be we figured out how to be a part of two very different families, how to manage our finances in a way that made us both happy, and how to play to each other’s strengths in deciding who does what job.

I suppose after living, more or less peacefully, with my husband for thirty five years that’s it only natural for me to want to give my daughter a bit of marriage advice.  So far, I’ve resisted the temptation, but if I did, my advice would be simple:  be true to yourself, be loving toward your spouse, and always make your marriage your priority.  Know there will be good days and bad days.  Sometimes he will annoy you by doing nothing more than walking in the room and breathing your air, because that’s what happens when you live with someone day in and day out.  But if you have chosen your spouse well, there will be far more good days than bad, because you are sharing your life with your best friend, your strongest supporter and the person you would rather be with more than anyone else.  And trust me, the years will just fly by……

23 thoughts on “Happily Ever After”